Leading a conversation on the subject of company diversity or gender equality is not as gratifying as it used to be.

The idea of equality advanced a great deal. And that’s a good thing.

Today, we can discuss the idea of equality relative to gender, sexual orientation, race, religion, education, and so on.

To illustrate; PwC’s study reveals only 27% of female students stated they would consider a career in technology, compared to 61% of male students.  Furthermore, gender equality is not the only area we need to consider here. In the same fashion – having an equal opportunity to obtain a job position along with educational equality leads us to a whole new conversation. For example, if I don’t get the same opportunity to go after higher education as my peers do, am I going to be able to accomplish equal results?

Not very likely. At least not as easily.

How Salesforce amplifies the idea of equality

Salesforce knows that being the leader in the CRM sector means also bringing positive changes within it.

Every year, in its Equality Update, Salesforce shares the current state of the company relative to equality, along with any future goals that are on the radar. 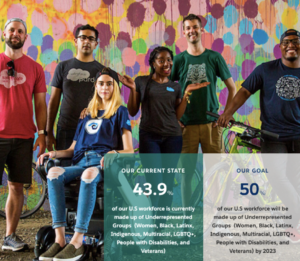 For many of us, equality is just a matter of consideration, but for Salesforce, it’s a serious undertaking.

“We strive to create a workplace that reflects the diverse communities we serve and where everyone feels empowered to bring their full, authentic selves to work. We have a Chief Equality Officer who reports directly to our Co-CEO as well as a team dedicated to this mission partnering across the company to drive change.”

You might say; “It’s nice to see that Salesforce cares, but how practical is this idea of equality?”

Well, when you start digging into it, bringing equality to life is not completely unattainable.

For instance, just by breaking the equality concept down, as Salesforce’s Chief Equality Officer – Tony Prophet did, we notice how manageable it is.

In his speech, Tony shared 4 pillars of equality:

Salesforce stands up for equality in the community, combating anti-LGBTQ legislation and supporting marriage equality.

Salesforce conducts annual salary audits and makes steps towards gender equality. For this purpose, Salesforce has already invested almost $10 million to balance salaries within the company.

Salesforce is investing in, and volunteering at public schools to ensure every child receives a good education regardless of background. Moreover, Salesforce is partnering with STEM education and workforce development organisations to push this cause further.

Salesforce is determined to create opportunities that reflect the workplace by adding more diverse schools to their recruiting efforts, investing in manager and employee training and interviewing underrepresented minority for executive positions.

3 ways to cultivate equality in your company

At Cloud Orca, we enjoy talking about equality quite a bit.

We take equality seriously — it’s embedded in our company culture as one of our core values. In fact, by exercising equality consistently, we discovered how coming to grips with inequality is not the easiest thing to do – but it is feasible.

Read on to capture the lessons we gained from our equality journey! 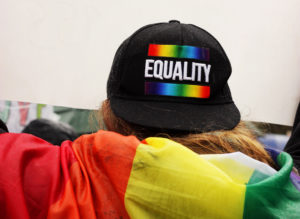 Including equality in the company statement or making it part of the core values is admirable. However, it is profoundly better to make an honest step towards true equality.

For instance, create an event to share ideas on the subject of equality with the entire workforce. Remember, everyone has a role to play on the path to equality.

Pick a time and space to host meetings to discuss equality and how to achieve it within the company.

Conversing on the concept of equality will create a solid nurturing ground for the company culture, which will lead to more openness and acceptance.

And isn’t that the equality we strive for after all?

2. Support equality incentives outside the company

By showing up in the world as an ambassador of equality, the company can only increase its ethical awareness.

For example, to spread equality cheers, the company can support a local school or sponsor someone’s education.

Additionally, many organisations, including Cloud Orca, participate in a pledge where 1% of the profits, time and resources go to socially responsible causes.

Little by little, the awareness will increase, which will inevitably create additional opportunities to do more as well.

Judging by Salesforce’s observations on equality, opportunities to do more are still out there (even for Salesforce).

In most companies, the hiring process is a perfect breeding ground to have those opportunities turn into reality.

For instance, companies can create a hiring process that will support incentives to hire talent from an underrepresented minority population.

Additionally, the recruitment team can look for ways to reduce bias towards age, gender or race, and instead, look for qualities each person brings to the table.

There are numerous opportunities to bring in more equality today, especially in the technology arena. But on the bright side, if we look at Salesforce’s annual Equality Update  — the numbers show movement in the right direction.

Here at Cloud Orca, we believe the crucial shift happened when we started the dialogue about equality. Even when the conversation seemed awkward at first, we were rewarded with the ideas that came out of them. We believe as a company in technology, it’s our responsibility towards society to move the needle on equality, and we are happy to embrace it.

What practice did your company incorporate to increase equality?

Share your thoughts with us in the comments below so we can keep the conversation going!

Stay in the know

To apply please fill the form below

Please complete the application form below and someone will be in contact with you.

Please fill out the form below and we will email you a link to download the PDF.